How To Correctly Choose A Curtain Pole?

How To Correctly Choose A Curtain Pole? Many questions before an important decision.

There arise multiple important questions, which must be answered before we make the right decision.

The most important criterium when choosing the right curtain rod is the character of our room. It is the interior style that will require a specific curtain rod type.

A properly chosen curtain rod will be in harmony with other interior décor elements, together making the perfect, coherent whole.

If our room is in the classical style, with stylish furniture, then the best fit would be traditional curtain poles. Classical collections of curtain rods such as Barrocco, Roma or Elegante will be perfect for classical interiors.

When the interior is kept in a modern style, its worth a look at modern curtain tracks. Collections such as SanRemo or Genova, beautiful straight shapes, with hidden sliders for moving the curtains, perfectly complete simple forms in the interior, while creating a discrete form of hanging window decorations. In modern interiors, we often don’t hang so thick curtains as with classical interiors, the curtains are often simpler, often these are just panels with a stretched straight piece of fabric, such as with Japan Panels type of curtains. In that case curtain tracks such as Collection Liguria are a perfect choice.

Type of the curtain rod and window decoration style

The next very important criterium is the type of window decorations that we want to mount.

Modern systems allow us to choose the kind of window decorations from many available solutions.

The most traditional curtain system, sewed with wrinkling tape, which allows for achieving a decorating effect depending on the type of tape, allows for hanging such a curtain on both a curtain rod and any curtain track.  It is important that those systems are equipped with curtain hooks or on traditional stakes as with curtain rods or sliders hidden discretely inside tracks.

Quite popular today are universal solutions, such as Eyelet curtains or Rod Pocket curtains, which don’t require restrictively sewn to measure curtains. Because of that it is easy to use those without risking the curtain being badly fitted to the size of the curtain rod. In that case it is necessary to use curtain poles. Depending on the diameter of the Eyelets, the diameter of the pole should be chosen accordingly from the recommended by Deco Belle 19mm, 25mm or 35mm.

In such case curtain rings are unnecessary. Each of the pole collections such as Venecia, Luna, Roma or Capri is suitable here. Thus all that remains is just the final decision about the color of the curtain rod.

When is a single curtain rod necessary? And when is a double?

The decision about number and style of the curtains, is often not just the decision of the interior designer on which curtains fit best to a given interior, it is often a decision from a practical point of view.

As such we often have doubled curtains, where one of the curtains is a Sheer curtain, which cuts off harsh sunrays during the day, without taking light away from the space, and at the same time protects from the neighbors gaze during the day.

The second curtain- the Drapery, is often decorational, used to cover the window during the night, or just as a window and interior decoration. In such a case a double curtain rod or track, one track for sheer curtains, and second for the drapery.

Sometimes however we don’t want to have two different types of curtains, but just one, either the sheer curtain or the drapery – in such a case a single curtain rod or track will be fitting.

Different curtain types dictate the use of different types of curtain rods.

Light curtains, sheer curtains, voile, don’t require special strong curtain rods. We can even hang them on poles with small diameters, especially when we want the pole to be discreet and less visible. We can even use a 19mm curtain rod, such as the collections Venezia, Millefiori, Lucca, Young, or Mondo.

However, if we have heavier curtains, such as jacquard, wool, velvet curtains, or blackout type curtains, then 19mm curtain rods are not recommended. Rather we should choose poles with a diameter of 25mm – collections such as Roma, Dolcevita, Luna, Capri, or for very heavy curtains 35mm poles, such as the Elegante collection.

In the event when the curtains are especially heavy, aforementioned pole systems are enough to support the weight of the curtain. It works well where the curtains have a mostly decorative function, and moving them will be very sporadic. However when we want our heavy curtains to not just look beautiful, but also perform a functional role and will often cover the window at night and revealing it during the day, or as in the case of blackout curtains they will be closed to shut off daylight to the interior, which means we want easy and often gliding the fabric, so the recommended solution will be the Verona II track system, where thanks to special sliders you can easily move curtains weighting even up to 8kg.

One of the most important criteria when choosing a curtain rod or track is ways to mount it. Sometimes we have a comfortable situation, and we have a lot of space on the wall above the window to mount the rod or tracks to the wall. Thus the choice of rod or track with wall supports is a good one.

Sometimes however the window reaches the ceiling, especially in modern interiors when the entire walls are windows, in such case the best solution are ceiling-mounted tracks such as collection Liguria which is nearly flush with the ceiling. Often this is important as the window below the track may open, and the curtain is hung closely enough to the ceiling to cover the whole window pane.

When choosing the curtain rod the functionality of the curtains is very important.

If the curtains are just for decoration, as it often takes place in living rooms, libraries, hallways, hanged once they don’t need to be moved, we have a lot of freedom with choosing the curtain rod.

However when the curtains are also for function, such as curtains in e.g. bedrooms, it is very important to choose a curtain rod that allows for their use.

In stylish interiors when we want to use traditional curtain poles, we have to pay attention on the number of supports, as they are blocking the movement of curtain rings trough the supports. If a curtain rod is longer than 2 m – in that case we use 3 supports including one in the middle, when the curtain rod is longer than 4 m we use even 4 supports – in such case moving the curtains with traditional poles is impossible.

In such case any curtain tracks should be considered, where the support system does not interfere with moving the curtain on its whole length. Here an alternative to traditional pole systems is collection New Roma – where in a traditionally looking pole, instead of curtain rings there are hidden sliders inside the pole, and the mounting system does not interfere with moving them.

Many aspects must be considered at the final decision in the choice of a curtian rod.

The DecoBelle team will help you in the choice of the right curtain rod system, if you have any doubts or questions write to the adress: info@tringlearideau.fr 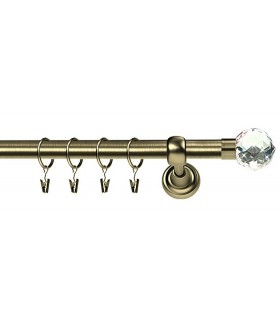 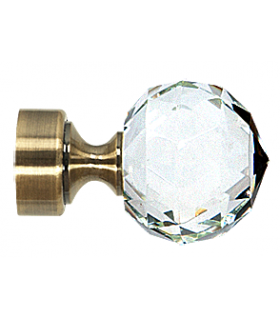 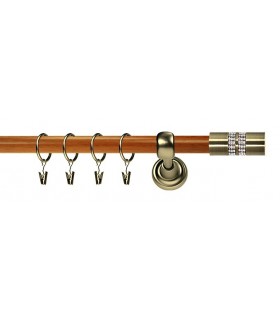 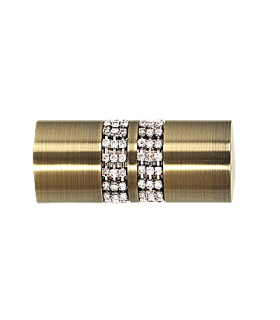 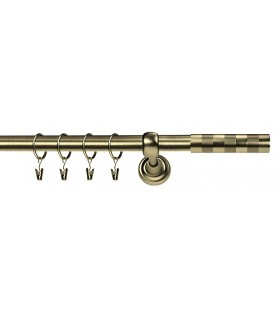 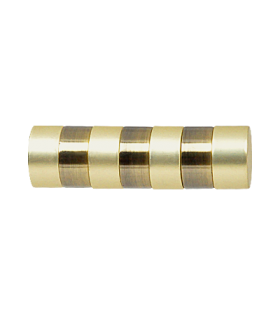 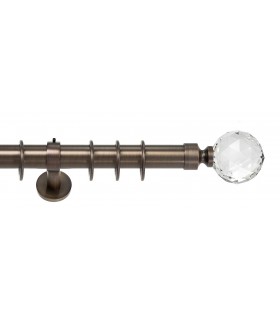 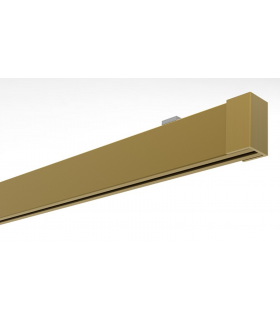 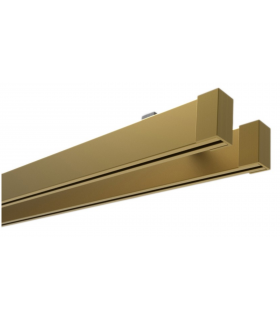 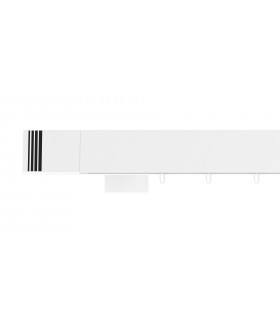 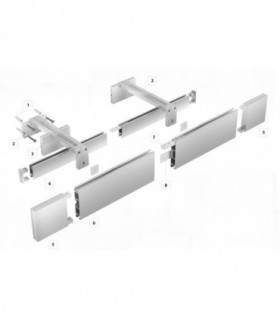 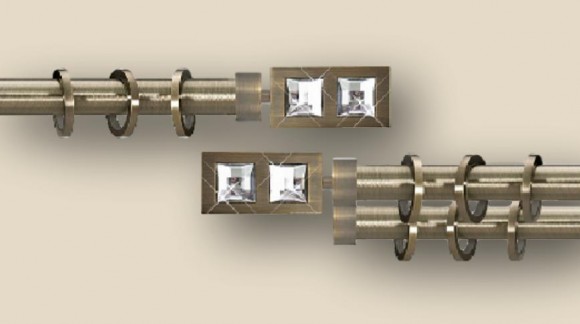 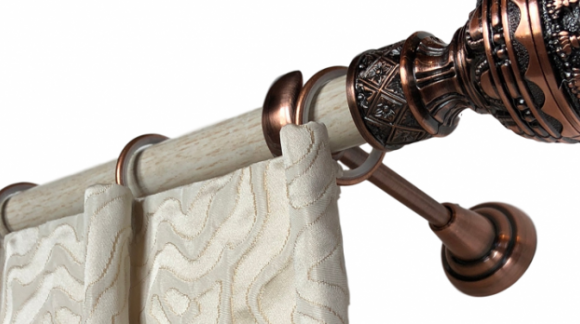 READ MORE Got it
×